SouthSide having an impact on San Antonio solar industry 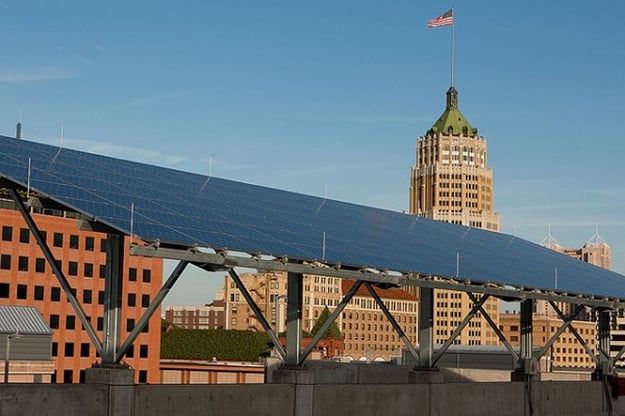 In all the talk about the oil industry and its widespread impact both locally and nationally, another booming industry is ready for its spotlight. The solar industry is having a positive affect on both the San Antonio economy and job market, a strong showing for a sector that has “nowhere to go but up.”

“San Antonio’s flourishing solar economy has created nearly 600 area jobs since 2012, according to a CPS Energy news release,” said the San Antonio Express-News. “After the utility announced a partnership with OCI Solar Power three years ago, an entire supply chain of solar goods — from production to consumption — has sprung up in the area. This effort, which CPS also claims has generated $134 in capital expenditures so far, currently provides San Antonio and Bexar County with more than 120 megawatts of power through four active solar farms, with three more farms under construction.”

Further, those numbers “actually exceed milestone agreements set by CPS and OCI, which have set end goals of 800 jobs, $700 million of economic impact and 400 megawatts of power.”

According to Mission Solar representative, Laura Waldrum, most of those jobs are coming from the company’s main manufacturing plant, which is located on the SouthSide at Brooks City Base. “The plant has grown from about 200 jobs in summer 2014 to more than 300 as of early June,” with most of them being staffed by local residents. “We’re proud to be on the South Side, contributing to the local economy here,” she added.

In fact, jobs in this sector are growing ten times faster that the national average for employment growth, according to Renewable Energy World. The growth is attributed in part to a drop in solar costs and more widespread availability.

According to the Express-News, San Antonio “ranks seventh among most major U.S. cities in existing or planned solar power installations.”

For more information about the best in SouthSide living, visit Mission del Lago or click below to download our free Guide to Buying a Home in SouthSide San Antonio.