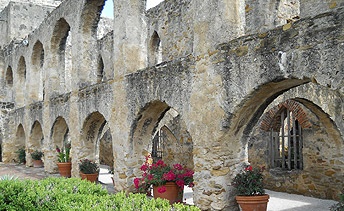 One of the many things that make living in San Antonio so unique is being surrounded by some of the most historic and iconic buildings in the world. These buildings continue to provide inspiration for new homes in San Antonio and provide a framework for some inspired architectural styles.

“San Antonio's buildings help define the city to the world,” said the San Antonio Express-News. “Whether it's tourists on vacation, professionals in town for a conference, or a major TV event like the NBA Finals, whenever the spotlight is on the Alamo City our buildings become part of the narrative. From the historic Spanish missions that were built centuries ago, to the Alamodome, which was completed in 1993, these buildings have helped shape the culture and landscape of South Texas.”

When those who live in San Antonio think about iconic building, the Missions are among the first to come to mind—especially The San Fernando Cathedral, the oldest church in Texas and on the National Register of Historic Places. It is notable as one of the oldest cathedrals in the United States. The Cathedral was restored and renovated in 2003 and 2011 but its Colonial architecture with Gothic details remain.

The Tower Life Building, a 31-story highrise in downtown and one of the anchors of the San Antonio skyline, is a great example of Gothic Revival architecture.

The Administration Building at Randolph Air Force Base is referred to as the “Taj Mahal” for its resemblance to the Indian palace. The building that houses the 12th Flying Training Wing is on the National Register of Historic Places.

The Spanish Governor's Palace is a National Historic Landmark that showcases what life was like in Texas under Spanish rule. It’s also a great example of Spanish Colonial architecture, complete with period furnishings and a courtyard featuring landscaped gardens.

A great place to drive through on your way to explore the Southside or downtown is the King William Historic District. Built by German settlers in the 19th century, the homes are large, historic, and feature in a variety of different styles including Greek Revival, Victorian, and Italianate.

The Aztec Theatre is listed on the National Register of Historic Places, and boasts “vibrantly-colored columns, sculptures, furnishings and murals, many of which are authentic reproductions of Meso-American artifacts,” said Wikipedia. “The interior of the theater is embellished with fixtures, furnishings, relief carvings, sculpture, plaques, painted symbols and architectural elements inspired by the Aztec, Mixtec, Zapotec, Toltec, and Mayan cultures”…and a massive two-ton chandelier in the lobby. The theater also appears in the travel book 1,000 Places to See Before You Die.

The historic, Italianate Fairmont Hotel is so admired it was actually moved in 1984 to avoid being razed by developers. The $1 million move took 132 hours and about 300 workers, was covered by national media, and earned the hotel a place in the Guinness Book of World Records, according to the San Antonio Express-News.

Built in 1896, the Bexar County Courthouse is a historical landmark constructed of red sandstone in the Romanesque Revival style.

The McNay Art Museum not only features striking Spanish Colonial Revival architecture, but was also named by the Wall Street Journal as one of the top four small museums in the country.

Hangar 9 at Brooks Air Force Base is the only surviving hangar from World War I, and is in the process of being transformed into a multipurpose entertainment center, part of the redevelopment of the Base and one of the many reasons people are increasingly moving to the Southside.

The SouthSide is arguably the hottest area in San Antonio, attracting Texas homebuyers who are returning to the area in which they grew up to raise their families, military and veterans, and employees of the Southside’s large employers, like Brooks City Base and the Toyota Manufacturing Plant.

Mission del Lago offers affordable and desirable opportunities for buying a home on the Southside with range of spacious, well-designed residences from renowned builders D.R. Horton and Lennar Homes for everyone from first-time buyers to mature families to retirees, to veterans. Beautifully designed residences filled with modern amenities start from just the $150s with square footage spanning from 1,308 to 3,000+.

Located just five minutes from IH-37 and 15 minutes to downtown, the community presents a scenic, serene setting and a host of amenities including the 18-hole Mission del Lago Golf Course that winds throughout the neighborhoods. New amenities including a swimming pool, clubhouse, walking trails are being built starting late summer.