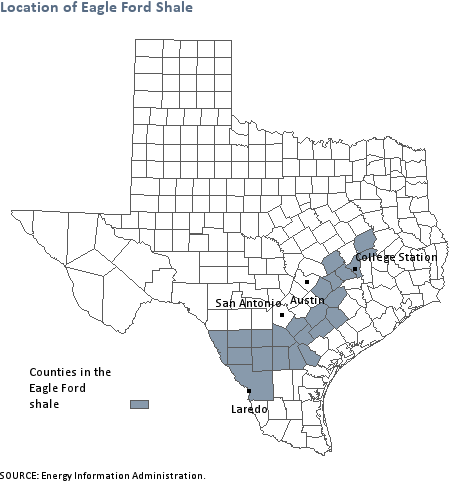 The oil and natural gas extraction industry is booming in and around the Eagle Ford Shale. Advances in horizontal drilling technology allow companies to extract oil and natural gas from the shale, bringing new jobs and growing wealth to many communities in South Texas including Southside San Antonio. The Dallas Federal Reserve recently discussed the growth in oil and natural gas production in the region and its effects on employment, income and economic activity.

During the first quarter of 2014, six counties produced over 80 percent of Eagle Ford Shale’s oil. Those counties also produced a significant amount of natural gas. Other counties in the region witnessed significant gains in production, which continue to increase employment, wages and economic activity.

Eagle Ford Shale forms an arc across 20,000 square miles in South Texas. It begins in Laredo near the Mexico border and extends 400 miles northeast between Austin and Houston.

The shale revolution, as some are calling it, has brought significant changes to local economies. The boom has created thousands of jobs and generated millions of dollars in government revenue, and there’s no sign of it stopping anytime soon. Companies have invested billions to expand transport capacity to Gulf Coast refineries, and estimates from the Energy Information Administration suggest the Eagle Ford Shale still contains 20.8 trillion cubic feet in technically recoverable natural gas and 3.4 billion barrels in technically recoverable oil. With the diversity of its resources and its close proximity to the coast, the Eagle Ford is poised to continue producing for many years to come.

Labor markets in Eagle Ford are growing rapidly. Employment growth in some counties has exceeded 20 percent per year since 2010. In most counties in the region, annualized wage growth has surpassed that in the rest of the state since the beginning of 2010.

Taxable sales in Eagle Ford began increasing sharply in 2010. Growth varies across Eagle Ford counties, but most have outperformed the rest of the state.

San Antonio, where Mission del Lago is located, is situated on the edge of Eagle Ford Shale and reaps the economic benefits of the oil and natural gas boom. Learn more about Mission del Lago homes and the surrounding community by viewing the community map below.